The Hermitage of Santa Maria di Montevergine was founded by an old hermit, Fra ‘Michele Alemanno, who arrived in Ischia as a soldier following Giuseppe D’Argouth, whose troops were stationed in the Castle of Ischia. He had it built at the foot of the hill of Zaro in the second half of the eighteenth century next to a very old small church, Later, after abandoning his weapons and wearing the habit, he spent thirty years in the Hermitage of San Nicola on Mount Epomeo. Fra Alemanno, now elderly, was persuaded by the harsh weather conditions of the mountain to look for a new solitary place. The University of Forio granted him the land in front of the pre-existing church, which dated back to at least the seventeenth century, as evidenced by a 1636 altarpiece located in the apse of the church of San Francesco di Paola. The University now contributes, together with the devotees , to the construction of the new building.

Fra Michele Alemanno died at the age of 105 in 1811. In the years following the death of the hermit the structure experienced a long period of decline. The Decurional Act of May 31st, 1840, preserved in the municipal archive, documents the concern of the municipality for the abandoned physical, and even spiritual, state of the hermitage and the church, which were devoid of a chaplain and managed at the time by three hermits with questionable conduct. The Municipality faced with a difficult choice: “The discussion was long, the proposals conflicting: one planned to entrust the administration of the church to the Reformed Franciscan friars who already managed the monastery of the municipality in an exemplary way, also satisfying the spiritual needs of the faithful; another proposal was to entrust the church to a chaplain.” It was precisely this solution that prevailed in 1863, when the municipality, after having dismissed ” two of these so-called Hermits, who had prostituted that place “, entrusted the church to a chaplain who renewed it and enlarged the hermitage, building a garden, a cistern, loggias, dormitories and other rooms. 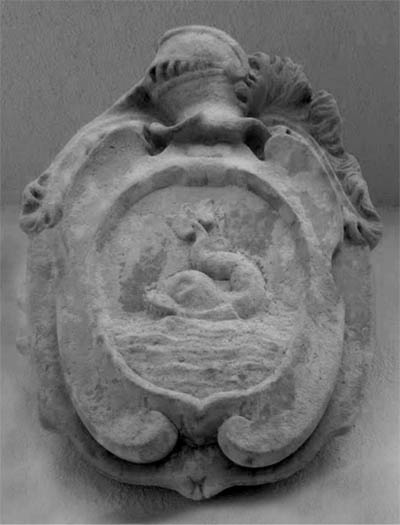 The noble coat of arms was placed on the front door of the house, which belonged to the Hussey family of Sleaford, the first owners of the hermitage.

The expansion of the Hermitage in 1901 proved to be essential to allow the Foriano doctor Giovanni Angelo Patalano (1873-1957) to respond to the Arab smallpox epidemic that had hit Forio and was decimating the population. The Patalano used the Church of S. Francesco di Paola and the adjacent hermitage ?? for the hospitalization and care of the numerous sick people. On the occasion of the hundredth anniversary of (or first centennial of) that event, in 2001, a marble plaque was placed on the facade of the Church of S. Francesco.
In 1924 the municipality ceded the convent adjacent to the Church of S. Francesco to the Stead family. This decision was due to the “very urgent restoration works that the factories (structure??? ‘factories’ is wrong, but I don’t know what is correct) of the ancient Convent of the Hermitage need, for the state of neglect in which it is found, restorations that this Municipality is unable to carry out, being unable to bear the relative costs, bearing in mind the exhausted finances “. The Hermitage consisted of the “ground floor in a courtyard with a cistern, vestibule, two storage rooms; a staircase with two ramps leads to the first floor vestibule, corridor, two small cells, porch, two small rooms; with another stairway to a ramp you access the paving stones … three other small rooms and another small vestibule Since then the former hermitage has become a private villa.
A brief period of its history is due to this English family, Stead, who since 1924 had in fact a large part in the transformation of the house, starting with Mary Helaine Hussey who was married to Alfred Stead. Mary Helain was the daughter of Lord William Hussey Earl of Sleaford, a descendant of an aristocratic English family whose origins date back to the 1400s. The first ancestor of this family of which we know is John Hussey 1st? Baron of Sleaford, Chief Butler of England, member of the House of Lords and chamberlain to the Court of Henry VIII. The noble coat of arms placed inside the Ischia residence, taken as the logo of our tourist activity, in all probability belonged to the Hussey family of Sleaford.
Maria Helaine Hussey’s husband, Alfred Stead, a famous writer, was the son of the British publisher and journalist W. Thomas Stead, a pioneer of investigative journalism, one of the most controversial journalistic figures of the Victorian era who died in the sinking of the Titanic. He was considered one of the most famous Englishmen present on board the ship, and was bound for New York for a pacifist gathering at the invitation of the President of the United States. Today a plaque in Central Park in New York, where he never came, still recalls this man. The large piano in the hall of the House has Alfred Stead’s initials “AS” carved in wood.
In this early period of the 1900s, the transformations carried out gave the house its current appearance. The new part of the hermitage was added to the oldest part , with a level terrace covering the road below, an unpredictable but very valid Mediterranean-style architectural interpretation bythe owner, who wanted to design it personally. The garden was enriched with local plants, or imported by the English family from India. The English nobleman also provided for the construction of some works in the adjoining church.
The Ischia house was donated in 1938 by his mother Mary Helaine to his daughter Cleves Stead Marett, a traveler and great art expert, who lived there for the serenity of the location and to escape the rigidity of the English winters. At the time of the donation, Cleves was an inhabitant of Jerusalem. Some votive niches on the municipal road adjacent to the house show the names of mother and daughter.
In 1940, during the Second World War, the house was requisitioned by the Italian authorities as the property of an “English enemy family”, and then returned at the end of the conflict. In the stretch close to the beach and along the rock wall that slopes down from the House towards the sea, was a shooting range called S.Francesco, some bunkers for coastal defense and a water tank all of which were built by the Military Administration. The remains of these artifacts can still be seen today.
In 1948 the nearby Church of S. Francesco was renewed: a new building was built close to the Hermitage, with three naves and a massive bell tower; the facade was set to align with that of the Hermitage.
From Countess Cleves Stead, in 1968 the House passed to the current ownership, which, between 1980 and 1990, carried out, important and necessary works to stabilise the structure, and adapt it for the tourist hospitality business.
In the final years of the 20th century and the beginning of the new century, the ex-hermitage became a quiet holiday residence.

In 2013 the Hermitage, after a few years of neglect, had a new life with the start of the conservation and renovation works of the interior, the modernising of the facilities and the resumption of tourist activity. The following year the “Hermitage of Montevergine Ischia Apartaments” was born and the first guests arrived.